I suggested last time that 2018 could beat 1976 to the title of UK’s hottest summer ever in the whole Central England Temperature (CET) series which goes back to 1659. I now doubt that will happen since a change in the weather is on its way. Here are Weathercast’s projections, albeit a couple of days out of date as their site isn’t updating at the moment (I guess someone will be in the office on Monday morning!):

And here’s what the Met Office have to say: 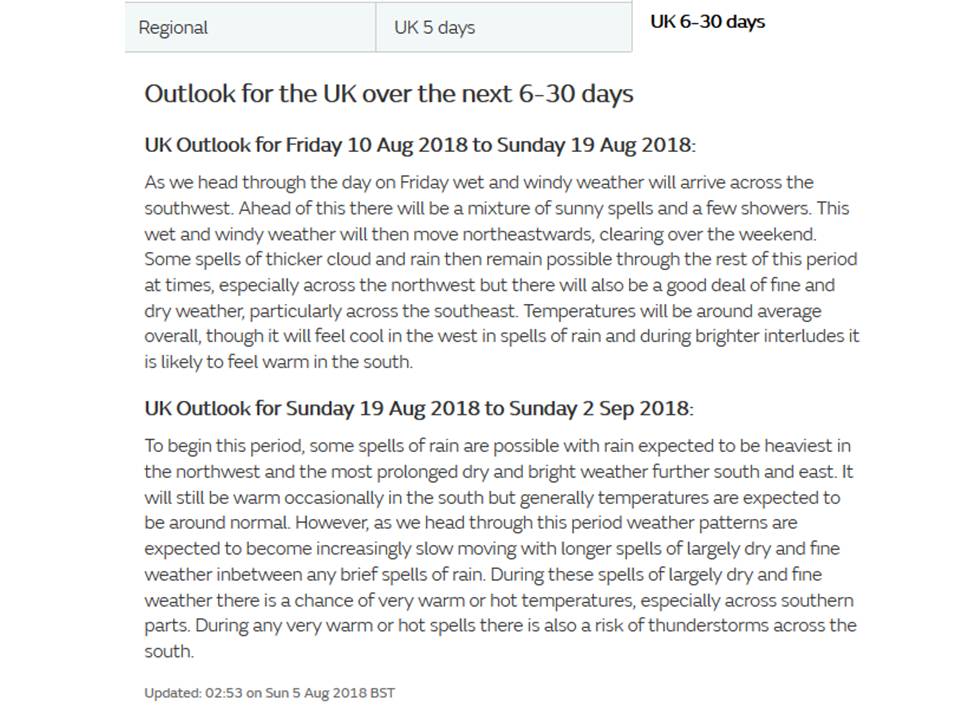 The CET mean for August so far is impressive: 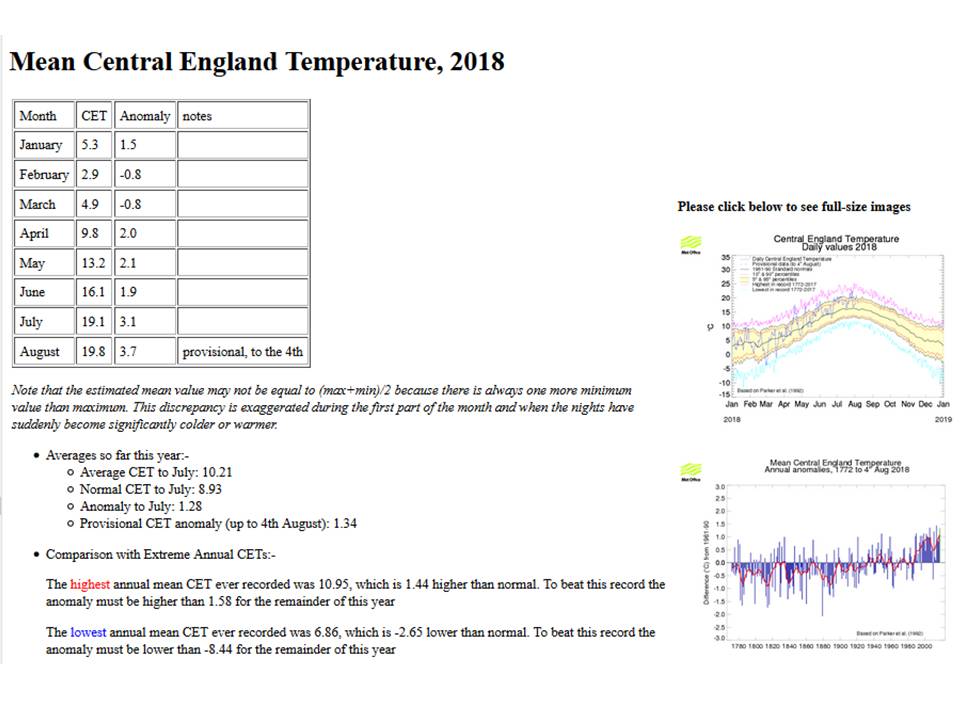 but a period of average daily mean temperatures (around 16C) will soon drag the monthly mean down below the 18C necessary for the June through August average to be higher than in 1976. Note that, after a cool start, it is now very possible that 2018 as a whole will be hotter than the previous hottest year in the entire CET record, 2014.

2018 has been exceptional, though. The problem is the arbitrary period (June, July and August) defined as the meteorological summer. But for 2018 to break all-time records it’s not even necessary to split months (e.g. by taking a period ending on 7th August). As I pointed out a fortnight ago, 2018 has been easily the hottest “early summer” – May, June and July – as well as easily the hottest for the period April through July. This seems very significant to me, because it illustrates the effect of global warming so starkly, but has been ignored or unnoticed by other commentators, so here again is a graph of mean annual May through July CET (as previously published, but with the final July figure of 19.1C incorporated): 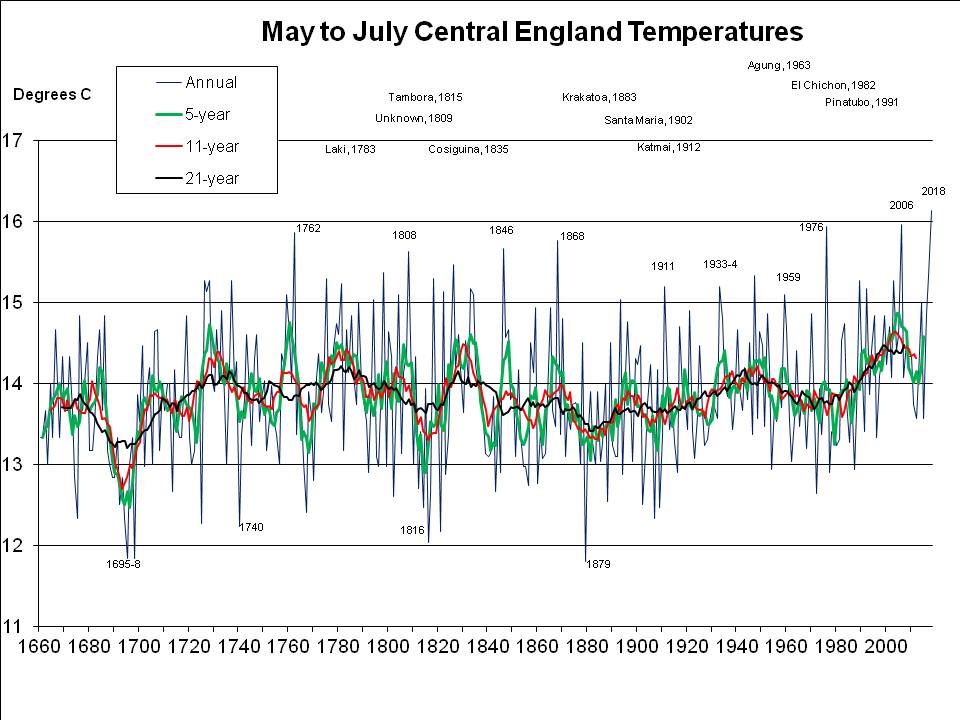 The question is, how much worse could UK heatwaves get, with global warming?

Now, I find statements such as the following from a recent Guardian front-page lead to be extremely unsatisfactory:

“Events worse than the current heatwave are likely to strike every other year by the 2040s, scientists predict.”

Curiously, this sentence does not appear in the online version of the same article.

How can it be possible for summers as hot as 2018’s to occur every other year in less than 30 years?

The planet is warming at “only” somewhere around 0.2C per decade, so by “the 2040s” is unlikely to warm by more than 0.6C. And my patent graph above shows that May through July 2018 has been around 1.5C warmer than the same period has been on average in recent years (and more than 2C warmer than it used to be in the average year).

So it would seem that, even by the 2040s, another summer as hot as 2018 would be quite unusual if average summer temperatures are only 0.6C warmer than at present: the graph above shows few summers – less than 10% – 1C or more warmer than the 21-year running mean (the black line).

It seems the “heatwave every other year” statement refers to temperatures across Europe as a whole. This is problematic for two reasons.

“According to different observational records of global average annual near-surface (land and ocean) temperature, the last decade (2008–2017) was 0.89 °C to 0.93 °C warmer than the pre-industrial average, which makes it the warmest decade on record.

The average annual temperature for the European land area for the last decade (2008–2017) was between 1.6 °C and 1.7 °C above the pre-industrial level, which makes it the warmest decade on record.”

Second, the “every other year” claim may be based on the average for a large area. As pointed out by King and Karolyi in Nature (“Climate extremes in Europe at 1.5 and 2 degrees of warming” (pdf)):

The UK is some islands next to Europe sticking out into the Atlantic at a latitude where weather systems usually move from west to east. Its climate is therefore influenced more by the ocean than the nearby continental landmass. Thus average UK summer temperatures have not been and will not by the 2040s rise as fast as for the land area of Europe as a whole.

The statement in the Guardian should not be taken as applicable to the UK.

Nevertheless, as summer 2018 shows, there are times when the UK is in step with Europe, climate-wise. And that’s when we get those exceptionally hot days and even entire summers.

The simple way to look at the risk of something worse than 2018 is to consider by how much freak UK summers in the past have been warmer than the average contemporaneous summer.

Let’s consider July and August first, since that’s when the heat is most intense. The following chart shows mean summer temperatures since 1659 at the top, with 11- (red) and 21-year (black) running means. At the bottom, in green, it shows the deviation of each year from the 21-year running mean centred on that date (extrapolated at the ends of the graph, by assuming no change from the first or last available year): 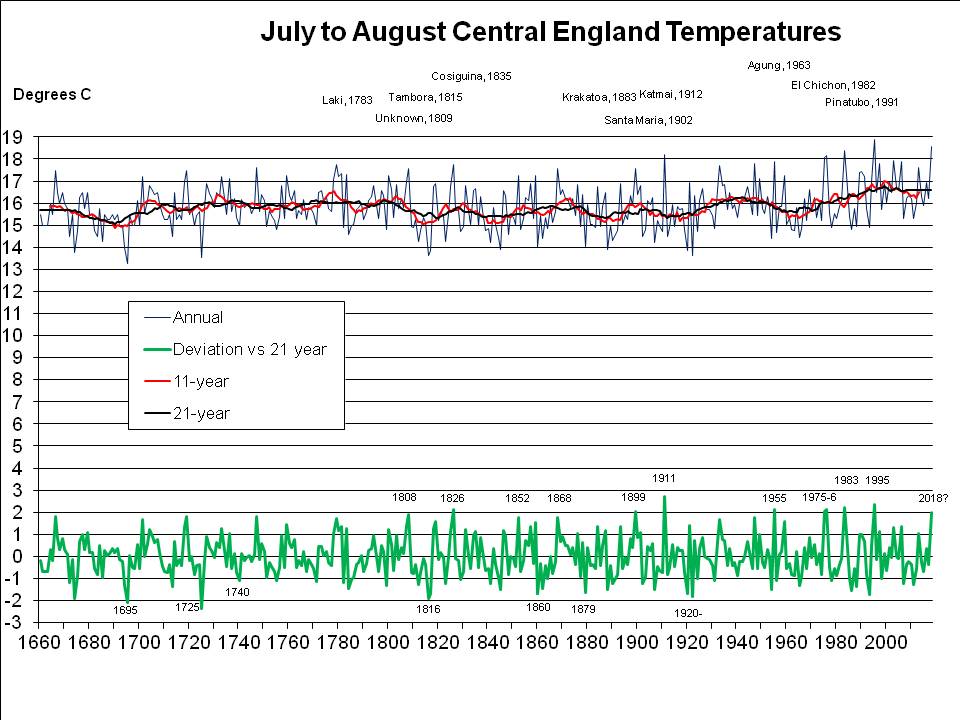 The most exceptional year in the entire 350 year series is 1911, when, as I mentioned in a previous post, the nobility reportedly played tennis in the altogether at their country estates, while riots broke out in the cities. The mean temperature in the CET series for July and August 1911 was 2.73C above the mean for 1901-1921.

If 2018 were to average 18C, as I previously assumed rather bullishly, it would only be 1.97C warmer than the mean nowadays (and maybe even less, since I’ve used the mean for 1998-2018 and not for 2008-2028, which won’t be available for another decade, but may well be higher). For 2018 to be as freakishly hot as 1911, the mean CET for August would have to be 19.6C, that is rather hotter than in the hottest August recorded (1995, at 19.2C), but following the third hottest July on record, at 19.1C. When there’s already a media frenzy about the heat in July, we’d have to experience an even hotter month – moreorless the current uncomfortable weather continuing for nearly another 4 weeks, rather than breaking up in a few days.  Not a pleasant prospect, but apparently possible, on the evidence of 1911.

And I mentioned earlier that May to July 2018 has been the hottest on record. But was it the hottest it could have been? It seems not. Other years were much more exceptional for their period, the record being 1976, which, relative to summers of the time, was more than 0.6C warmer from May to July than 2018: 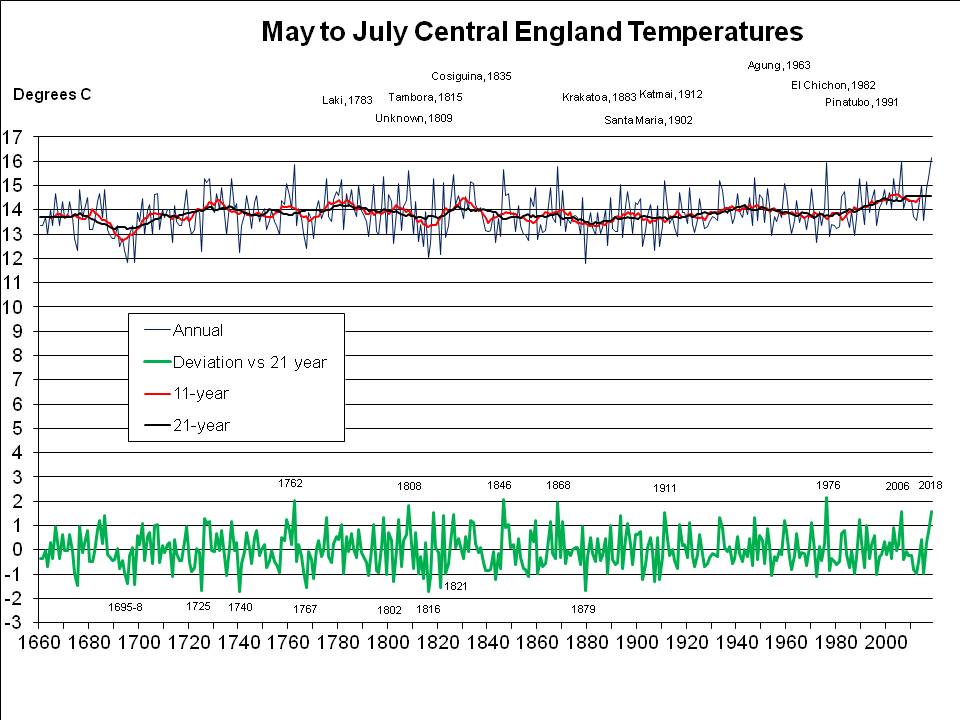 So one real risk for the UK is that we could experience a truly freak summer, that is, a summer much hotter than the warmer summers we are experiencing because of global warming. 2018 has been exceptionally hot on some measures, but much of that has been due to global warming. It really hasn’t been a freak.

But has global warming changed what’s possible? Could there be even more serious heatwave risks for the UK than summer temperatures as much above the current norm as they were in 1911 and 1976? These questions will be addressed in the next exciting instalment!