2018 is already notable (pending final data for July) for the hottest May to July and the hottest April to July in the entire 360 years of the Central England Temperature (CET) record, as the graphs in my previous post show so eloquently. Nevertheless, besides foaming at the mouth that Englishmen are being advised not to go out in the mid-day sun (optional musical interlude), certain sections of the media are speculating rabidly as to whether 2018 could be the hottest summer ever. The Express, for example, announces that “Summer 2018 [is] on track to beat ALL RECORDS as HOTTEST day looms”, though neither the article, nor the accompanying Met Office video, quite say that.

When the media, and especially the Met Office, refer to “summer” they mean June, July and August. So pedantic. It can be nearly as hot in the UK in May and September, so comfortably the hottest May through July recorded in 360 years seems more significant to me than barely the hottest June through August.

Especially as the main feature of this summer is the lack of any significant breaks in the weather as opposed to the sheer heat – unless I’ve not been paying attention we don’t seem to have broken a single daily record for the UK as a whole so far. I went so far as to question in my post reporting on a fairly warm June whether we were experiencing a heatwave or just warm weather. I’ll grant, though, that this week, with peaks consistently over 30C here in London, does feel unpleasantly like a “heatwave”. And at least one daily record high may be anticipated.

So what are the chances of June to August, “summer”, being the hottest ever in the CET? Simple: the CET mean for August needs to be 18C or higher. I’ve put 18C in the data for August and produced this graph: 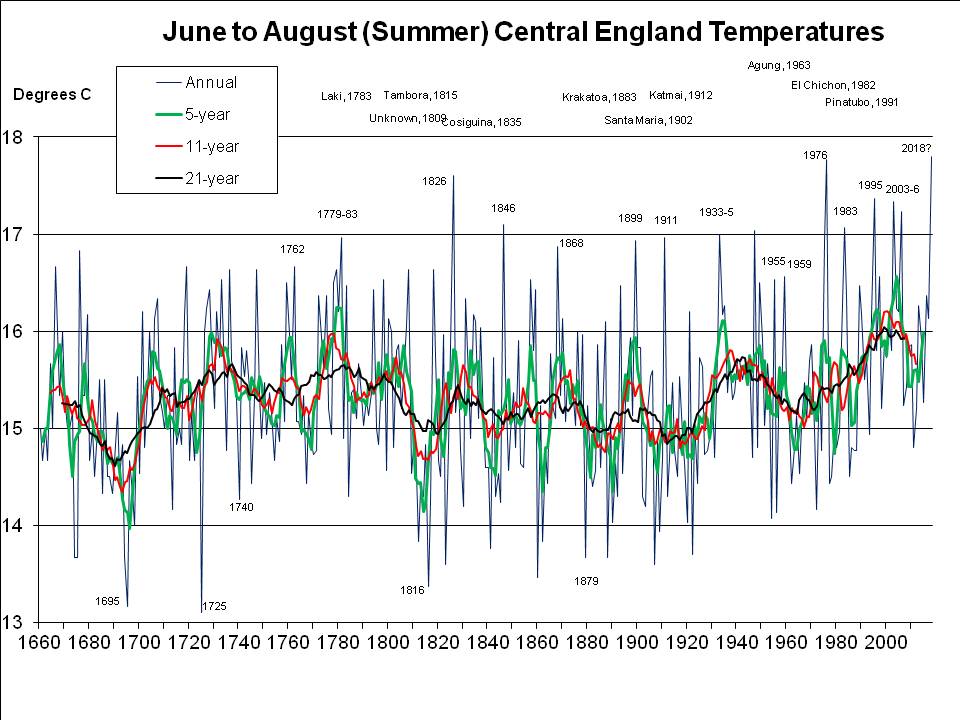 There are a couple of assumptions. First, I still have 19.3C as the figure for July. The Met Office page is currently showing 19.4C up to 23rd, so 19.3C should be safe enough, since the next few days are likely to drag up the average for the month, although the figure can change by a few tenths right at the end of the month. I understand this to be because data from remote weather stations comes in late and I’ve noticed that the monthly figure is usually adjusted downwards, at least in winter.  Second, the figure for June was adjusted down significantly (which caught me out somewhat), but that this has been queried. Obviously if that adjustment was erroneous and the June figure is revised upwards (which I don’t expect to happen), then August doesn’t need to be so hot for 2018 to break the summer record.

But how usual is an 18C mean in the CET for August? That presents the opportunity for another graph!: 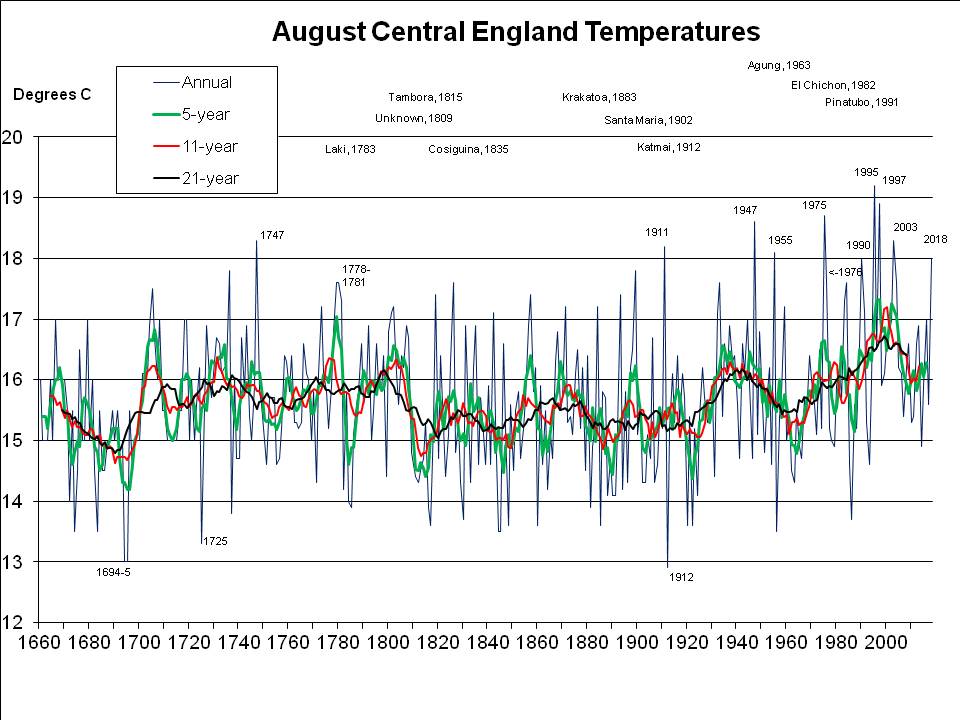 As can be seen, 18C in August was pretty unusual for two or three centuries and not even achieved in 1976, which only managed 17.6C. But in the global warming era 18C is very possible, provided, of course, that current weather patterns continue.  If they don’t everyone will be wishing they’d trumpeted the record spring-into-summer heat!