10 days or so ago I discussed the possibility that March 2013 would turn out to be the coldest in the Central England Temperature (CET) record since the 19th century.

Here’s a list of the coldest Marches since 1800 in the CET:

A few questions and not quite so many answers occur to me:

and second coldest for England as a whole:

The figures all tally suggesting that the parts of England not included in the CET were less exceptionally cold than those included, as I suggested before.

2. Why hasn’t the Met Office trumpeted March 2013 as the second coldest on record?
What I’m alluding to here is that the Met Office only made their “second coldest” announcement on their blog, not with a press release. The press release they did issue on 26th March was merely for “the coldest March since 1962”, and included somewhat different data to that (above) which appeared on their blog for the whole month:

“This March is set to be the coldest since 1962 in the UK in the national record dating back to 1910, according to provisional Met Office statistic [sic].

From 1 to 26 March the UK mean temperature was 2.5 °C, which is three degrees below the long term average. This also makes it joint 4th coldest on record in the UK.

Looking at individual countries, March 2013 is likely to be the 4th coldest on record for England, joint third coldest for Wales, joint 8th coldest for Scotland and 6th coldest for Northern Ireland.” (my stress)

and a “top 5” ranking that doesn’t even include March 2013, which eventually leapt into 2nd place!:

As I’ve also mentioned before, it’s odd to say the least that the Met Office have formally released provisional data (and not the actual data!) to the media.

So I’ve asked them why they do this, by way of a comment on their blog:

“The Met Office’s [sic – oops] announced a few days ago that March 2013 was only the ‘joint 4th coldest on record’ (i.e. since 1910) rather than the joint 2nd coldest. This was based on a comparison of data to 26th in 2013 with the whole month in earlier years, which seems to me a tad unscientific.

Maybe it’s just me, but it seems that there was more media coverage of the earlier, misleading, announcement.

Why did the Met Office make its early announcement and not wait until complete data became available at the end of the month?”

I’ll let you know when I receive a response – my comment has been awaiting moderation for 4 days now.

3. Why was it not clearer from the daily CET updates that March 2013 would be as cold as 2.7C?
And what I’m alluding to here is the end of month adjustment that seems to occur in the daily updated monthly mean CET data. I’ve noticed this and so has the commenter on my blog, “John Smith”.

I didn’t make a record of the daily mean CET for March to date, unfortunately, but having made predictions of the final mean temperature for March 2013 on this blog, I checked progress. From memory the mean ticked down to 2.9C up to and including the 30th, but was 2.7C for the whole month, i.e. after one more day. At that stage in the month, it didn’t seem to me possible for the mean CET for the month as a whole to drop more than 0.1C in a day (and it had been falling by less, i.e. by 0.1C less often than every day). Anyway, I’ve emailed the Met Office CET guy to ask about the adjustment. Watch this space.

Here’s the graph for March mean CET I produced for the previous post, updated with 2.7C for March 2013: 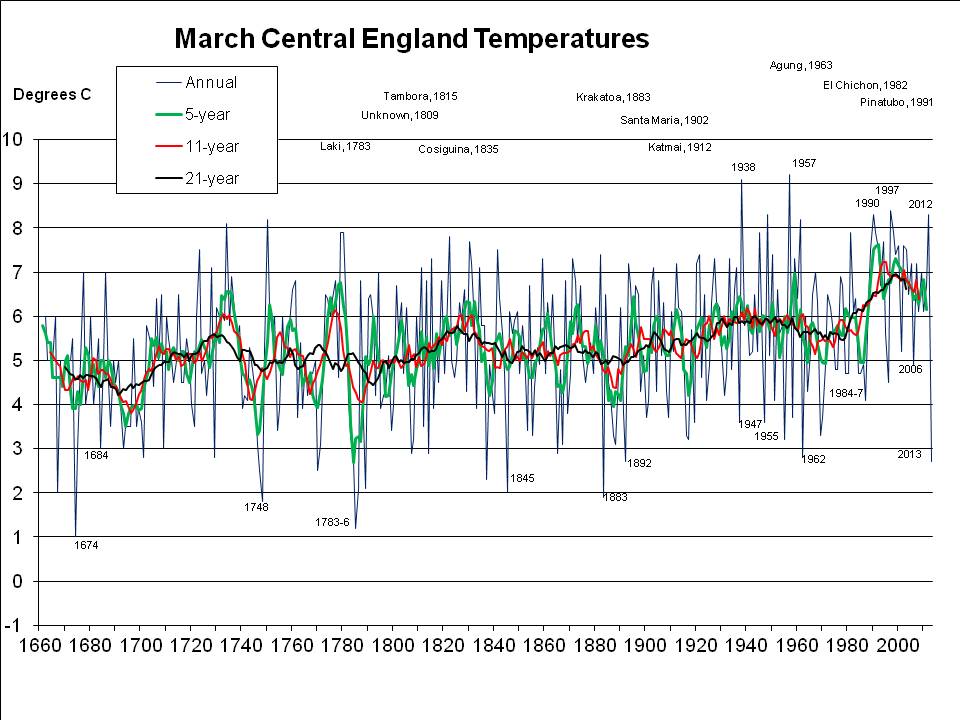 A curiosity is that never before has a March been so much colder – more than 5C – than the one the previous year. But the main point to note is the one I pointed out last time, that March 2013 has been colder than recent Marches – as indicated by the 3 running means I’ve provided – by more than has occurred before (except after the Laki eruption in 1773).

I stress the difference with recent Marches rather than just March 2012, because what matters most in many areas is what we’re used to. For example, farmers will gradually adjust the varieties of crops and breeds of livestock to the prevailing conditions. A March equaling the severity of the worst in earlier periods, when the average was lower, will then be more exceptional and destructive in its effects.

The same applies to the natural world and to other aspects of the human world. For example, species that have spread north over the period of warmer springs will not be adapted to this year’s conditions.  And we gradually adjust energy provision – such as gas storage – on the basis of what we expect based on recent experience, not possible theoretical extremes.

OK, this has just been a cold March, but it seems to me we’re ill-prepared for an exceptional entire winter, like 1962-3 or 1740. And it seems such events have more to do with weather-patterns than with the global mean temperature, so are not ruled out by global warming.