I’m sure it would be possible to spend all one’s spare time on a blog devoted solely to exposing exaggerations about the weather in the British press. I therefore ignore most hyperbole I see. Today I’m making an exception. This is what the Express wrote yesterday in its latest attempt to grab the attention of the elderly demographic which no doubt makes up a large proportion of its readership:

“A bitter cold blast from Scandinavia will see the mercury plummet to -15C (5F) over the next few days with more snow on the way.

The freezing conditions are expected to hold out until the beginning of next month bringing almost a fortnight of harsh frosts and icy roads.

And it is set to make this February the coldest for 22 years.”

Most of their readers will not see overnight frosts more than 5C below zero and the snow is expected to be light – a dusting at most.

But what stood out for me was the claim that February “is set to” be “the coldest for 22 years”, that is, since the year of “the wrong kind of snow” in 1991. This seemed to me to be quite a strong claim, at least for the Central England Temperature (CET), which can be taken as representative of the UK as a whole, since, up to the 20th, February is so far averaging 3.8C, 0.1C above the mean for 1961-90. The outlook is for a few cold, but not extreme days, warming a bit towards the end of the month, as shown in this screen grab from the useful Weathercast site: 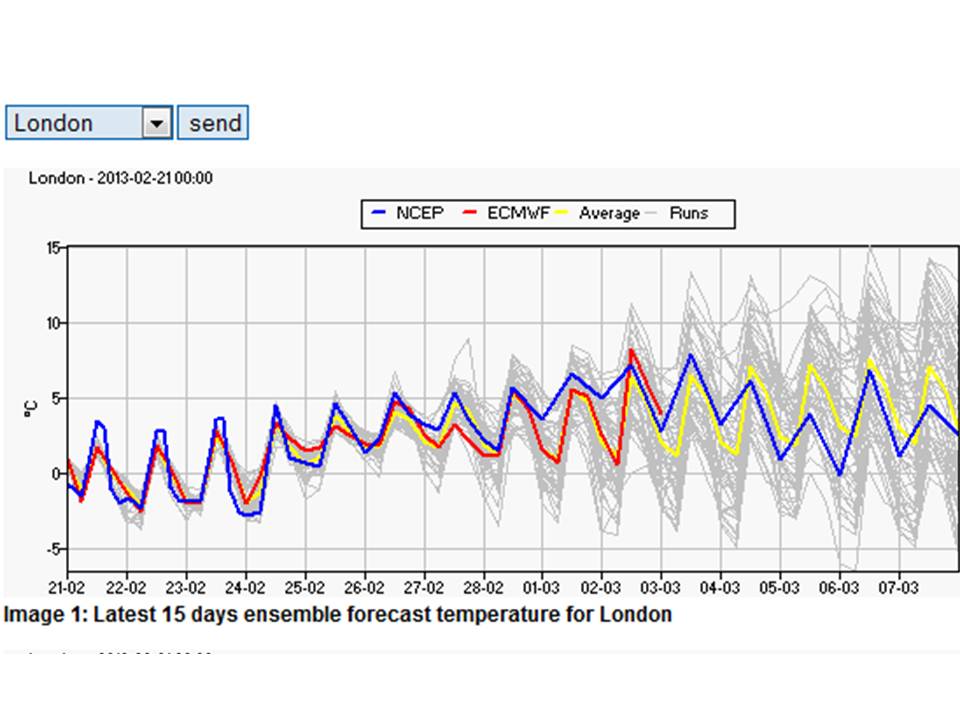 It seems unlikely to me that a cold snap could knock much more than 0.5C, 1C tops, off the mean for February, given there’s only a week or so until the end of the month. Surely that couldn’t get us down to a 20 year low? The 20 year low, I reasoned, must be a lot less than 3.8C since the mean CET for February can actually be negative. I still remember February 1986 when an easterly brought cold air from the Continent (but little snow) for practically the entire grim month.

So I dusted off my spreadsheets and looked at the CET data.

No, the Express is not really justified in writing that:

“[The current cold snap] is set to make this February the coldest for 22 years.”

“Might” or, even better, “could just possibly” rather than “is set to” would have avoided overstating the case. But let’s see how the temperature data shapes up over the rest of the month.

Temperatures for the winter as a whole are also worthy of discussion. I wrote last time that:

“…it seems fairly likely that February 2013 will at least be less than 0.2C warmer than average. With December 2012 0.1C warmer and January 0.3C cooler that would make winter 2012-13 colder than the historical average (over 1961-90). Even this is by no means certain, even though everyone, especially Boris, is saying what a severe winter it’s been. It just goes to show how much we got used to milder winters through most of the 1990s and 2000s.”

It’s now clear that February 2013 will not be more than 0.2C above average, so we might say it’s “officially been a cold winter.”

The thing is, this is the 4th “cold winter” of the last 5! And it looks sure to be the mildest of those!

Furthermore, the 5 year running winter CET mean is not that notable, as shown on one of my CET graphs: 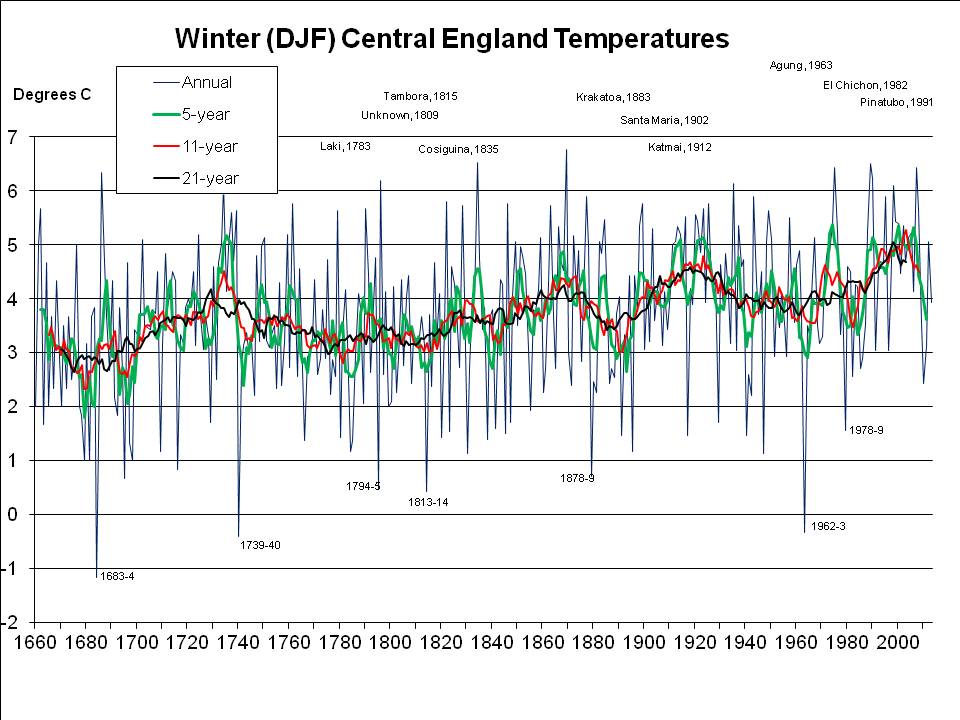 I’ve brought this right up to date by estimating that the mean CET for February 2013 will end up at 3.3C.

Although the 5 year running mean (the green line) has dipped significantly in the last few years, it’s not only done so just as dramatically many times before – most notably around 1740 – but also remains higher than at many times in the past, most recently in the early 1980s.

The 11 year running mean (the red line) has also dipped, but from its all-time peak of 5.28C for the 11 years centred on 2003. It remains at historically very high levels.

And mean winter temperatures averaged over the last 21 years (the thick black line) remain higher than at any time before the 21 years centred on 1995.

Whilst it does seem that the pattern of the UK’s winter weather has shifted over the last 5 or so years, the hyperbole surrounding the phenomenon is counterproductive. Not only does it help sustain misleading claims global warming has gone away or never existed in the first place, it also makes us entirely unprepared for a really severe winter of the likes of 1962-3. The apparent lack of contingency in UK power supply should be of greater concern to government. Winter power-cuts now would be even more of a shock than in 1963, when the deprivations of the War and its aftermath were much more recent memories.