Our vision: If customers had a choice, they would choose Thames Water.
– signoff on email from Do.Not.Reply@thameswater.co.uk.

I don’t know why that quote creases me up, since it expresses a very sensible aspiration. Maybe it’s because it could be so easily adapted: “Our vision: If voters had a choice, they would vote National Socialist/Communist/United Russia [delete as applicable]”. Or maybe it’s just my sense of humour.

I’ve recently had to move home, so am experiencing no end of hassle, in large part in dealing with various utilities and suppliers. This has led me to formulate a hypothesis: the level of incompetence of an organisation is directly correlated with the extent of its monopoly.

So, as an aside within this inaugural MonopolyWatch newsletter, perhaps US car rental customers should start to worry with Reuters reporting that:

“Hertz Global Holdings [has] agreed to buy rival Dollar Thrifty Automotive Group for about $2.3 billion in a deal that puts about 95 percent of the U.S. car rental market in the hands of three companies.”

Why do we allow takeovers, such as of Dollar Thrifty by Hertz? Do we really believe that 3 choices is enough to ensure healthy competition throughout the entire US? It seems to me that in most markets the presence of at least 10 suppliers is necessary to provide sufficient consumer choice and drive continual quality and feature improvements and cost reductions. Surely “consolidation” across industries such as car rental is driven almost entirely by large organisations seeking to achieve a greater degree of monopoly power? So why don’t we – or at least our elected representatives and public officials responsible for the health of the overall economy – resist this process more strongly?

Back to Thames Water. They’re not the worst, but not far from it. Ealing Council, for example, have no rule for deciding who pays the Council Tax on the day you move. Or perhaps they do have a rule, but don’t understand it! Let me explain: you don’t move in or out at midnight, but Council Tax applies – and there seems to be little disagreement on this point – per calendar day, i.e. from midnight to midnight. In fact, likely you formally move some time around midday, let’s say at 11am on 16th August, for the sake of argument. So who pays the Council Tax for 16th August, the person moving out or the person moving in? Simple enough, you’d have thought. (For the record, I’d expect the rule to be along the lines of hotel room bookings, i.e. the person moving in on 16th pays the Council Tax for 16th, just as if you booked a hotel room for “the night of 16th” that would be the night starting on 16th and ending on 17th!).

How could Thames Water match this? Well, they make a clear distinction on their website between customers moving within their catchment area and those moving outside it: 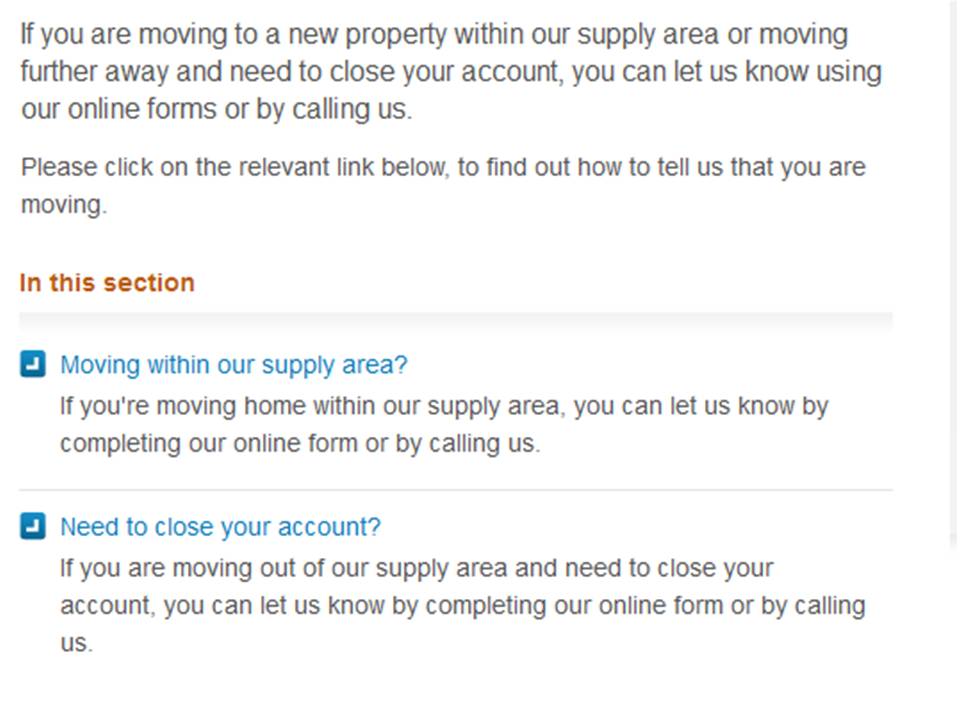 Clearly, if moving out of Thames’ catchment area means you “need to close your account”, the implication is that moving within the catchment area keeps it open. They even ask you for a moving-in date to the new property. This makes some sense, since there may, as in my case, be an overlap, i.e. the rental for the new place started before the one for the old place ended. I don’t think it’s just me being pedantic: asking for information about where you are moving implies Thames are going to carry the account over, as, for example, Virgin Media do (more about those scum another time).

But whoever is moving out from the new property will also have told Thames you are moving in. Does Thames’ website sort this out in some intelligent manner, e.g. by overriding or matching the names provided by the previous resident at the new property? Seemingly not.

And does Thames’ website ask if you want to carry over your Direct Debit when you move? Nope.

Do Thames reassure customers in any way that they will not be billed twice for the property they are moving to. No.

Is it actually possible I could even end up paying twice? Who knows?

Since I now have a new account number and have had to set up a new payment arrangement, is there any sense in which the account at my previous address has not been closed as if I’d moved out of Thames’ catchment area? Seemingly not.

Nevertheless, I dutifully went on line and set up a Direct Debit to Thames. This is where the tale really takes off. What day of the month did I want to pay on? I selected 15th. But when I went to the next screen the form showed 14th. So I pressed “Back”. Big mistake.

This screen-grab shows what I saw next:

Thinking maybe I’d inadvertently selected 14 instead of 15 the first time and that Thames’ had implemented a new form of drop-down list omitting the current selection, I selected 15 again. No dice: the next page still showed 14.

I decided to settle for paying on 14th. And guess what? That wasn’t the only problem with this one simple web page. No sirree. Even though all the data I’d entered – name, address, bank account etc – was showing on the screen, the software didn’t think it was there. I had to enter it all again.

On one level it is a bit odd having alternative gas and electricity suppliers all selling an identical product, coming along the same pipes or wires. Given no differences in what is supplied, one should expect little difference in prices. But at least you can choose energy suppliers that are competent in handling the billing process. Why not allow the same for water?