This post supercedes my previous effort, since it includes an updated version of my paper on the CERN-OPERA neutrino velocity measurement experiment.  It complements my two earlier posts on the fast neutrino problem, the first being a general discussion of my explanation for the detection of apparent superluminal neutrinos and the second a detailed look at Einstein’s train thought-experiment.

They say a picture’s worth a thousand words.  I can tell you that’s a massive underestimate.  I could have bashed in 5,000 words in the time it took me to conceive of the following diagram, construct it in Powerpoint (is it really totally pants, or do I need a training course?) and most of all, tinker with it. And I’m still not sure it’s clear enough (comments welcome): 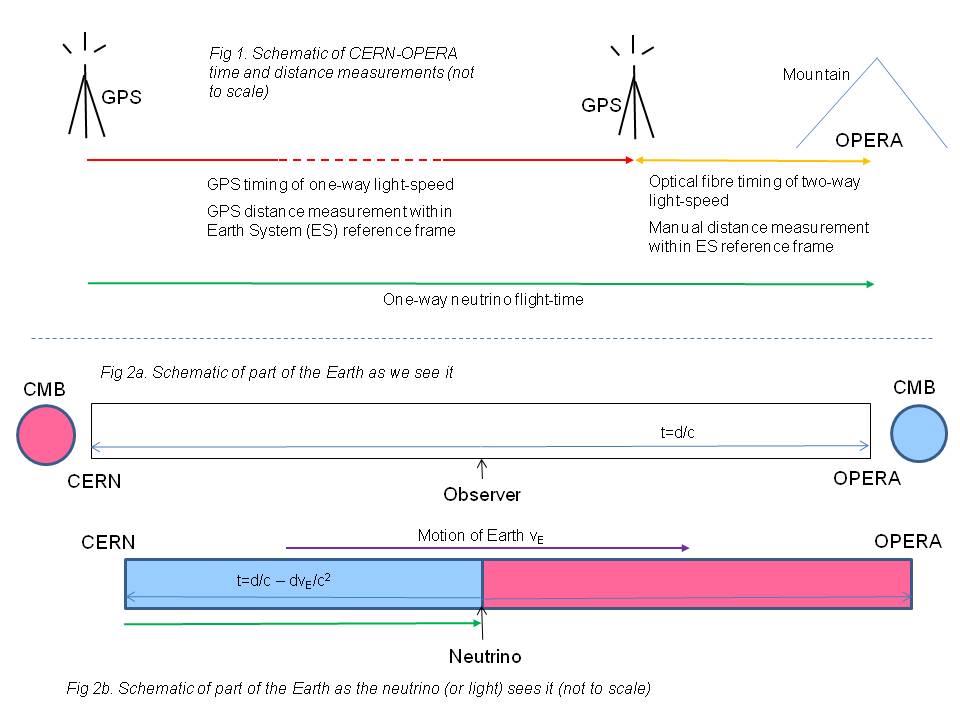 In Fig 1, I’ve shown a schematic of the neutrino velocity measurement experiment. It’s very simplified as the neutrinos were not sent exactly from the GPS at CERN. Similar errors may have occurred there as I am about to describe at the OPERA neutrino detector end of the experiment.

The aim of Fig 1 is to show that, over most of the neutrino flight path, all timing measurements were “one-way”:

But, crucially over part of the neutrino flight path, the experimenters have used the two-way light speed to determine the expected neutrino flight time. They had to do this because the OPERA neutrino detector is inside the Gran Sasso mountain to protect it from cosmic rays.

The question is whether the light “thinks” it moves at the same speed in all directions with respect to us here on Earth.

The answer is it doesn’t. Why would it? The Earth isn’t even a speck of dust over the distance light and neutrinos can travel. Light speed is nearly 30,000 times the Earth’s escape velocity. Neutrinos go through planets like bullets through tissue-paper. I could go on.

Fig. 2 attempts to show why light doesn’t “think” it moves at the same speed in all directions with respect to our experimental equipment.

First, Fig. 2a shows part of our planet as we perceive it. We perceive distances and therefore time the same in all directions. We set our clocks the same everywhere and assume that light simply takes d/c (the distance divided by a constant speed of light) to get from A to B, or CERN to OPERA in this case.

But, in fact, the Earth is moving, as shown by the fact that distant objects, such as what I recently saw a cosmologist term the rest frame represented by the cosmic microwave background (CMB) (this link has some good CMB schematics, too, btw), appear blue-shifted in the direction we’re moving in – the relative motion causes the photon waves to appear closer together – and red-shifted in the other direction. The CMB appears blue-shifted, not due south, but in a southerly direction (this is important).

Now, the fact that the planet is moving matters. Its speed relative to the CMB is about 600km/s or 1/500th light speed, which is significant when you’re trying to measure neutrino flight times to the nearest nanosecond (ns) or so.

I’m going to digress and explain why movement matters. Here’s another diagram (you really are being spoilt today!): 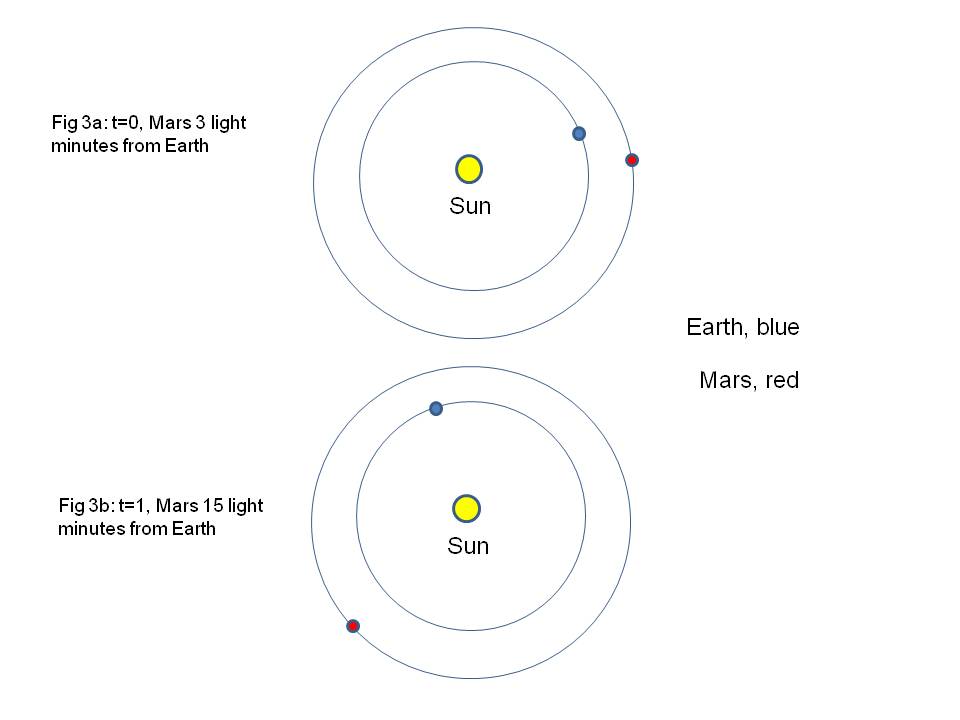 All we have to do is imagine we’re on a mission to Mars. Mission control are really sweating us – sending people to Mars is not cheap – but have said that we can have precisely one hour off each day to watch the 60 minute episodes of the second series of Firefly we’ve been waiting for for decades. After all, improved morale will increase efficiency.

Unfortunately, the PVR broke on landing so we can’t record the show or fast-forward through the ads. We have to be at the TV to catch the actual broadcast.

Now, if the show is broadcast at 8pm on Earth the time it will reach Mars depends on how far away we are at the time. Light takes 8 minutes to reach Earth from the sun, so I’m guessing that, during our mission, Mars could vary from being, say, 3 light minutes away from Earth to, say, 15, as illustrated in Fig 3.

Hopefully it is apparent that if we have a clock on Mars set to Earth time, we will have to adjust it continually as Mars moves further away from and closer to Earth as the two planets follow their different orbits around the Sun. The rate at which clocks appear to move on Earth as seen from Mars varies continually.

There is no absolute time, a common misconception.

Rather, relative time depends on distance and the relative rates at which time seems to pass depend on relative motion.

Now let’s consider how all this appears from the point of view of a neutrino (or light). Now, light can’t move at greater than the speed of other light. Such faster than light travel would effectively be the same as going back in time.

So light (and neutrinos) always travel at the speed of light, c, in empty space. If other objects are moving then they will perceive light to be red-shifted in the direction they’re moving from and blue-shifted in the direction they’re moving. The light waves are stretched (red-shifted) or squashed up (blue-shifted). As will be seen, it’s only by convention that we don’t instead consider the Earth as squashed up or stretched, which in fact might be a better fit to how the Universe actually is – as usual (sigh!) our perception is Earth-centric.

In Fig 2b, then, I’ve put the neutrino in the middle of its journey from CERN to OPERA (it might have been less confusing to have put it at the end, but the view forward is also interesting). Looking back, the neutrino would see CERN coming towards it at ~500km/s, due to the motion of the planet – the distance it has had to travel to OPERA is shortened (blue-shifted) by the Earth’s motion. This is true when the neutrino arrives at OPERA, so the neutrino has travelled less distance because of the motion of the Earth. It is not moving relative to the planet, but relative to all the other light in the Universe. It has to, otherwise some light would travel faster than other light, and that’s not what we observe.

Now to confuse the issue (probably a good job neutrinos can’t really see!). Looking forward, the neutrino sees OPERA moving away (red-shifted), but after it covers that distance, where it currently is (and CERN) will look blue-shifted. Got it? If it’s any help, this is exactly analogous to the discussion of Einstein’s train thought-experiment where, you will recollect, Bob was able to warn Alice, even though it seemed to Xavier that Agent Zero could reach her in less than d/c time in his near-light speed ship inside the train moving towards her, than the d/c he knew it would take Bob to warn her along the platform.

If the Earth is really moving, then, why don’t we reckon time to take account of that fact? Well, consider how awkward it would be (Fig 2b). Light would still travel at the same speed in all directions, but we’d dispense with the idea of time being the same in different places. Instead of having time constant everywhere and assuming that distances are the same in all directions, as we perceive, we’d have to assume time is different everywhere, and that it varies with distance depending on the motion of the Earth system. Or alternatively, we could keep an idea of time as the same over the whole planet and have distances vary depending on which direction we’re going in (as shown by the red-shift and blue-shift)!

Because we’ve forgotten these points that were long ago demonstrated in special relativity, and followed the convention to assume our time can be used to measure the speed of light and neutrinos travelling in all different directions – which it can’t – we’ve observed the neutrinos travelling as faster than they actually are.

The expected arrival time of the CERN neutrinos at OPERA should have been calculated taking into account the motion of the Earth, vE, as:

This can simply be understood (ignoring the complex version of the formula) as the distance the Earth would have moved in the time light travelled a given distance, divided by the speed of light.  It works out to about 5.6ns/km.  This is a maximum value, if the experiment were oriented directly in line with the Earth’s motion.

The precise distance that was measured without taking special relativity into account is uncertain, but the paper describing the experiment notes that there is a 8.3km optical fibre cable at San Grasso, though it’s the distance as the neutrino flies that is important.

The neutrinos appeared to arrive 60ns early.  Do the math.

——————
I’ve discussed this issue in much more detail in a paper Analysis of Flawed Fibre Time-Delay Calibration Methodology in CERN-OPERA Experiment v0.3 (pdf). I’d really like to post this on the open physics site, ArXiv, but I need to be endorsed by someone with the right credentials to do so. If anyone reading this can help, please contact me via this blog.

The OPERA neutrino experiment at the Gran Sasso Laboratory, [1], obtained a measurement, v, of the neutrino muon velocity with respect to the speed of light, c, of (v-c)/c = (2.48 ± 0.28 (stat.) ± 0.30 (sys.)) ×10-5, that is, in excess of c by about 1 part in 40,000. Over most of the neutrino flight path from CERN to OPERA, distances and timings were established by GPS signals to within 2cm and (2.3 ± 0.9)ns respectively. These measurements are not problematic. The Gran Sasso Laboratory is underground, however, and a significant part of the measurement of the expected flight time at c was established using two separate fibre delay calibration procedures, both of which are based on the two-way speed of light rather than the reference-frame dependent one-way speed implicit in the GPS and the velocity of neutrinos over the (one-way) flight path from CERN to OPERA. The two-way light speed measurement ignores the moving frame of reference (the Earth system (ES)) in which the experiment was conducted and introduces errors of the same order as the early arrival time of the neutrinos (60.7 ± 6.9 (stat.) ± 7.4 (sys.)) ns. Similar problems affect all attempts to measure the one-way speed of light [2]. This paper explains these problems, with reference to Einstein’s train thought-experiment and suggests how the expected one-way speed of light in a moving frame of reference such as the ES could be derived using the cosmic microwave background (CMB) as a stationary frame of reference. This problem is additional to the clock synchronisation issues described in [3], and can be traced to a flaw in a procedure, [5], which may have been used at CERN on other occasions, so may affect other experiments involving the accurate measurement of particle velocities approaching or at c. The experiment may yet prove to be important as it would, in fact, have measured a one-way neutrino (and hence one-way light) velocity and, by identifying a stationary frame of reference (possibly that defined by the CMB) with respect to light (and neutrino) transmission, perhaps shed light on cosmological questions.