As ever, none of the foregoing should be taken as financial advice – if you want that you’ll have to consult a professional – but I’ve noticed that a few people have recently found themselves in Uncharted Territory after searching for information about Lloyds shares.  I hope they aren’t trying to decide what to do about the rights issue because that’s long since all been and gone.  Maybe what people are looking for, though, is a conversion of the current share price to the pre-rights price.

The point is that, after an announcement last week that – hip-hip-hooray! – the bank is on course to actually make a profit this year, the shares have perked up to about 64p after dipping below 50p following the rights issue.  But how good a performance is this?

Back in November I discussed the theoretical ex-rights price (TERP) in a number of posts.   The bottom line is that prior to the rights issue Lloyds shares were trading at around 90p, but the effect of the new share issue meant that following the rights issue they would be expected to trade at around 60p.

60p would represent a “par” performance.  If demand for the shares increased following the rights issue – as a result of some good news, perhaps – then they’d trade at a higher price.

The question is what price would Lloyds shares have had to be trading at for the TERP to be 64p?

Obviously, too, we could devise a formula, but it’s also simple to put a few columns in a spreadsheet and plot a graph: 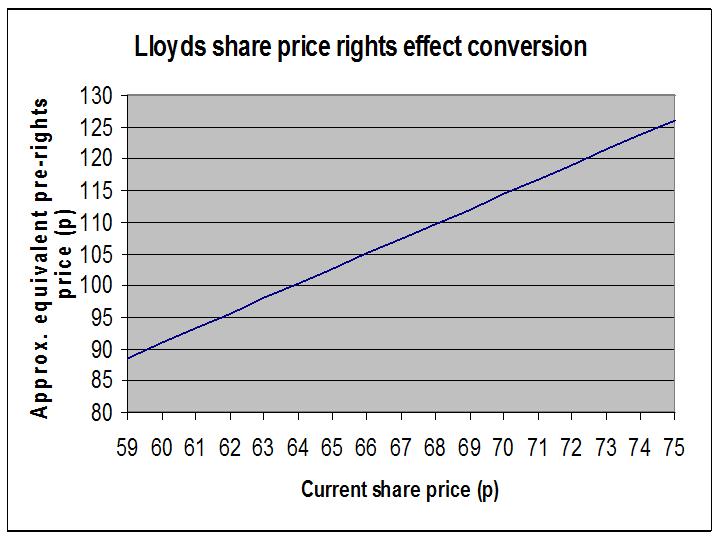 So if Lloyds’ share price were to reach 70p, this would be very roughly equivalent to 115p before the rights issue.

The whole point of this exercise, of course, is that knowledge that there was an upcoming rights issue may have depressed the Lloyds share price before the rights were even issued. The additional issue of shares would be expected to depress the share price – supply and demand – and market participants may have anticipated this and sold some of their holdings in advance.

The following graph from Yahoo! Finance shows how Lloyds’ share price was trading in the run-up to the rights issue last November: 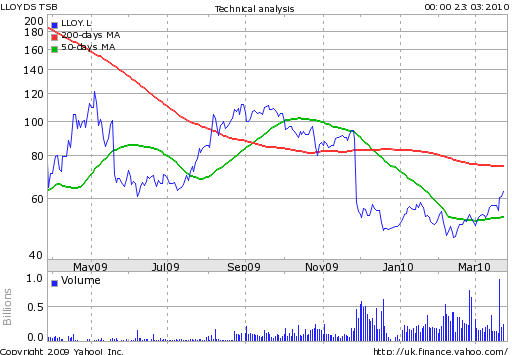 So, based on my calculation, the Lloyds share price at 64p is very roughly still in a range equivalent to the 100p at which pre-rights shares were trading at roughly at the start of last October.

Hope that’s helpful and feel free to point out any errors or criticise my assumptions, in particular those in the two Notes below.

———–
Note 1: My calculation ignores the further share issue since the rights issue. This diluted everyone’s holdings (including that of the Treasury, from 43% to 41%). It complicates the comparison of pre-rights and post-rights share prices, but because the latest issue was not at a significant discount I’ve assumed the effect can be ignored for a very approximate calculation.

Note 2: Only £13bn of the £13.5bn was available to the bank following the rights issue, which (scandalously) cost £500m. This is a complicating factor when comparing the post-rights price with the share price before the issue was announced. Personally, I’d be inclined to regard the £500m as money down the drain. The calculation, though, assumes it was money well spent and that shareholders received £500m of value for their £500m cash.